A core tenet of leadership is trust.

This trust goes both ways. Your staff need to trust in your ability as their leader to be hard-working, just and candid with them. Conversely, you need also to be able to have trust that your staff are able to do the same for you. High levels of trust create mutually beneficial relationships where each party wants to do their best for one another. Low levels of trust create dissidence, politics and a gradual collapse of teams.

The importance of trust goes beyond just how well you get on with those around you: it has a direct impact on your effectiveness and output as a manager. Aside from my immediate responsibilities in day-to-day activities, I would say that some of the most important facets of my role are attracting and retaining the best people I can find and, once I’ve hired them, ensuring that they are doing challenging and satisfying work so that they can accelerate their careers. How does trust factor into this?

Trust in your staff ensures that you’re able to delegate the work best suited to them so that it is both satisfying and stretches their ability so they can grow. Trust ensures that you’re neither micromanaging nor deserting them while they’re doing it. Trust means that your conversations can be candid and therefore tackle the tough but pressing issues. Trust means a small problem is discussed early and is resolved, rather than it silently snowballing until somebody hands in their notice.

The most challenging part of maintaining trust is that it is extremely fragile. A relationship and rapport that has taken years to build can be lost in an instant. One unfortunate event, intentional or not, can rewind a relationship significantly. Depending on the size of the mishap, it can even erode the default level of trust that others at the company have in you, regardless of whether you work closely with them or not, and there’s little you can do to take it back; that’s just human behavior.

But you’re getting paid well, right?

One viewpoint that I have observed, especially from those that are outside the technology industry, is that generous compensation – whether through raw salary, stock options, or other perks – has the effect of excusing untrustworthy behavior from leaders and the company as a whole. The argument is that if people are getting paid well for their efforts, then, surely, they can confide in their compensation when other dimensions of their role are more abrasive.

Well, I don’t agree. I like to think that, for those of us working in the knowledge industry, we are intrinsically motivated to do a good job and to improve our skills independently of the exact quantity of our renumeration. Many of the software engineers that I know, including myself, still enjoy programming enough to do it in our spare time for fun. In fact, the 2018 Stack Overflow Developer Survey cited that 80% of their respondents still do programming as a hobby. So yes, of course, we like to be paid as well as we can for what we do (who wouldn’t take a pay rise?), but the environment in which we perform our jobs, especially within the dynamics of the relationships that we have with our manager, direct reports and our peers, is a key foundation of job satisfaction.

For example, months of turmoil at Uber resulted in many employees quitting, despite the impressive growth of the company and high compensation. Indeed, we have all heard – probably from our parents – that money doesn’t buy happiness, but research has reinforced that viewpoint. A poll of over 1 million people showed that income level only correlates with happiness to a “satiation point” over which additional income is not associated with greater happiness. In the technology industry, which is generally well compensated, most people earn more than this satiation point, so other factors, such as relationships with colleagues and purpose and challenge of work, are the drivers for retention.

Other surveys have produced similar results. Stefan Sagmeister’s TED talk gave a highlight of another study in this area. Watch the clip until 3:26.

Getting happiness from your social interactions at work requires that they come from a place of mutual respect and trust. When they aren’t underpinned by those foundations, all sorts of things can go wrong. Let’s see how.

There is a case study which beautifully highlights the nature and fragility of trust. I was fortunate enough to see Clay Shirky speak at Brandwatch‘s NYK conference in Chicago. His talk brought to my attention a paper that showed proof of a contraction of the deterrence hypothesis. What does this mean? Well, the hypothesis is that introducing a penalty, such as a fine, for unwanted behavior, will reduce the occurrence of that behavior from happening in the future.

The paper performed a field study of a group of 10 day-care centers in Israel. When parents sign their child up to attend a day-care center, they sign a contract that states that it operates between 7:30AM and 4PM. This implies that parents should come and pick up their children at the end of the operating hours. If parents were to turn up late, they would notice that a teacher would also have to stay late until all of the children were picked up. The authors of the study note that before the study happened parents were only occasionally late and would rarely come any later than 4:30PM.

This relationship was based entirely on trust. Parents knew that if they were late to pick up their child then this would have a direct effect on the time that the teachers were able to go home. Nobody wants to feel guilty, right? But could lateness be prevented altogether? The deterrence hypothesis presumes that the introduction of a penalty – in this case a fine – for the parents of children that are picked up late, would reduce the occurrence of it happening.

So, that’s what the study did. After the 5th week of monitoring lateness they introduced a fine into 6 of the day-care centers. Any child that was picked up more than 10 minutes late would require the parents to pay the equivalent of roughly the hourly rate for a baby-sitter. After 17 weeks, they removed the fine and explained to parents that it was a trial that they were evaluating. What were the results? 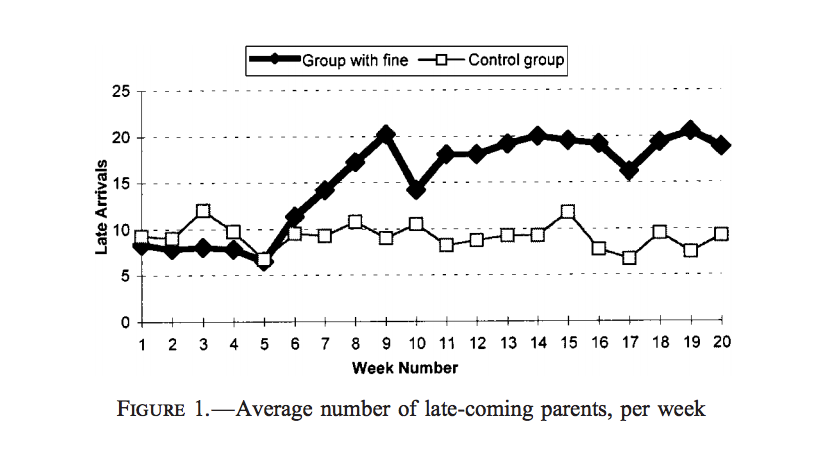 Surprisingly, the introduction of the fine made the late behavior worse! You can see the dramatic increase in late arrivals from the group with fines in week 6. Prior to the fine being introduced, a late pick-up would mean a feeling of guilt from the parents when they saw the teacher waiting there with their child upon arrival. The deterrent against lateness was one of mutual understanding that lateness causes inconvenience for another human.

After the introduction of the fine, however, a relationship built on trust and respect became one that was contractual and based on money. Parents who didn’t want to rush to the day-care center at the end of the day could instead just pay a small amount of money to vindicate themselves from any bad feelings.

Even more surprising was the observation that on week 17, after the removal of the fine for late pick-up, the behavior didn’t revert back to the pattern before week 6. A relationship based on trust, after transformation into one dictated by money, stays broken.

What can we learn from this? Firstly, we can see that you can’t excuse poor relationships or untrustworthy culture by throwing money at the problem. Additionally, once you’ve gone past the breaking point for trustworthy relationships, they’re extremely challenging to restore.

How do we build and maintain trust?

Building trust requires no special techniques or skills that aren’t available to you in this moment. In fact, when trying to increase rapport through means that feel forced or unnatural, you’ll find that it has quite the opposite effect. Trust is built through being open and consistent with your intentions and actions, and is reinforced by acting on behalf of the values that you hold true.

Here’s some primers for your thoughts on how to build and maintain trust.

Trust takes a long time to build and retaining it requires transparent and consistent effort to maintain. It can be lost surprisingly quickly. We can’t replace trust with a contractual obligation or financial contract. Being yourself and acting in congruence with your own values gets you a lot of the way. Admitting your own struggles and conflicts makes up the rest of the journey.